3 Reasons Why The Toyota Tacoma Is The Best Selling Truck

The Toyota Tacoma has been holding it down on and off the roads now for several decades. Being the best selling truck in North America for 16 years, it’s the number one choice for a reliable workhorse and private daily driver that is ready for any adventure. But how did the Toyota Tacoma get there from being first introduced in 1995? Find out in today’s blog post with three reasons why the Tacoma is the best selling truck to this date!

First, let’s start with a brief history on Toyota Pick-up trucks. While the brand introduced the Tacoma in the 90s, they have been making pick-up trucks for decades. It all started in 1969 when Toyota offered their first pickup truck in the United States, called the Hilux. With a short wheelbase, rear-wheel drive and 1.9 liter engine capable of producing 84 horsepower, the Hilux was a pretty standard truck for its time and it was not until later when a longer wheelbase and bigger engine were offered with the second generation. Toyota slowly made a name for themselves in the compact truck segment as the third generation, the Toyota Truck was offered in the United States.

Sales continued to grow and by September 1977, the millionth truck rolled off their production line in the United States. Future generations of the Toyota Truck would continue to improve engine power, bed size and durability throughout the years, earning Toyota the truck of the year award in 1889. From there, a new production plant in California would introduce Toyota’s truck of the future. Finally giving the Toyota Truck a name, the Japanese brand introduced the “Tacoma” in 1995, making it available in several trim packages and options while improving comfort and performance from previous generations. 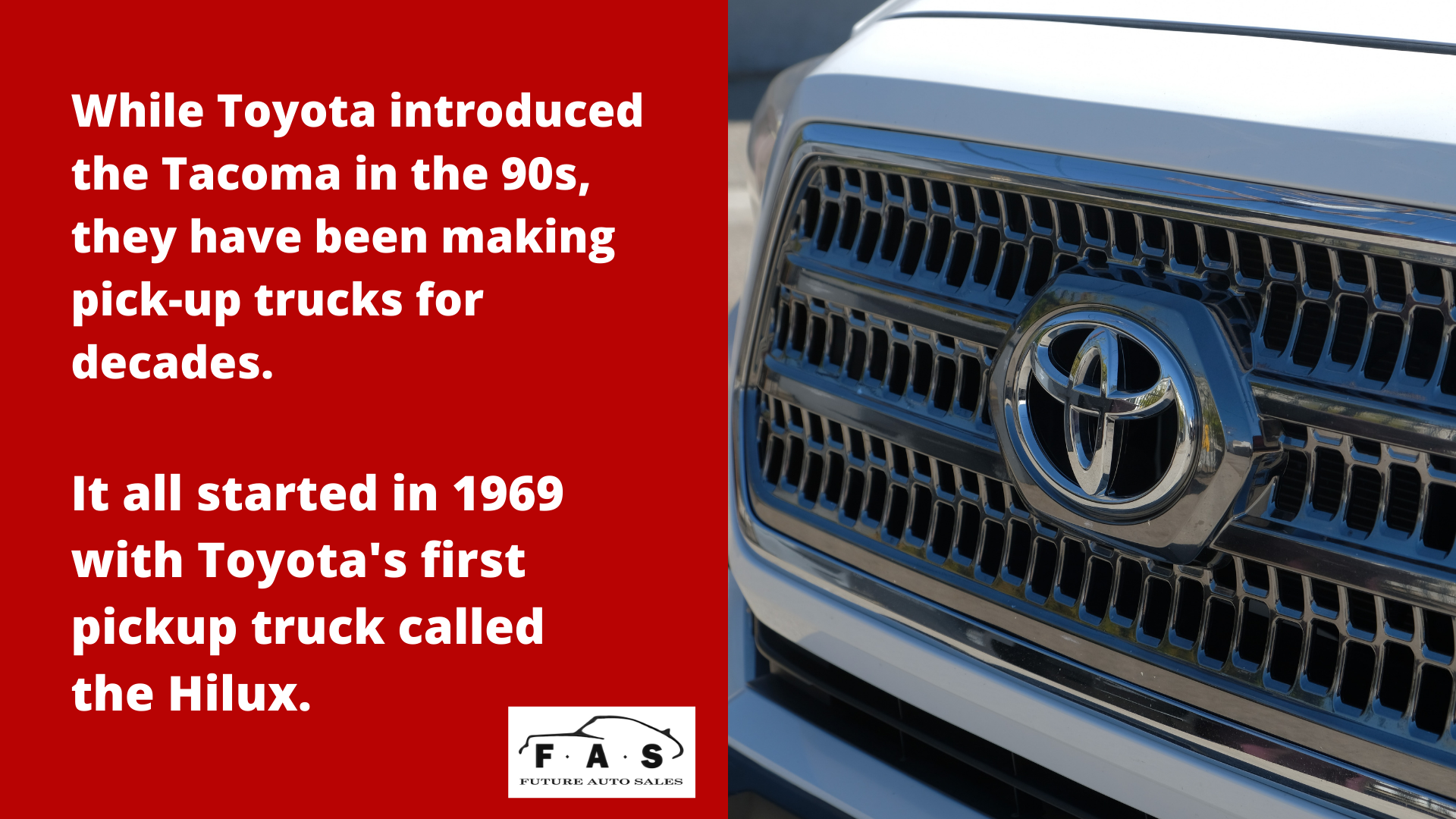 While the entire Tacoma lineup has quite a reputation given its incredible legacy, there is no denying that two of the six trim models stand out the most. The Tacoma TRD and TRD Pro models are ready to go fast and dirty from the factory.

Equipped with upgraded Bilstein and Fox suspension systems, both trucks shine off-road and the TRD Pro even out-performs the Jeep Gladiator competition according to Car and Driver.

To top it all off, unique design elements such as hood scoops, overfenders, and unique badging give the Tacoma TRD and TRD Pro a heritage-inspired personality. 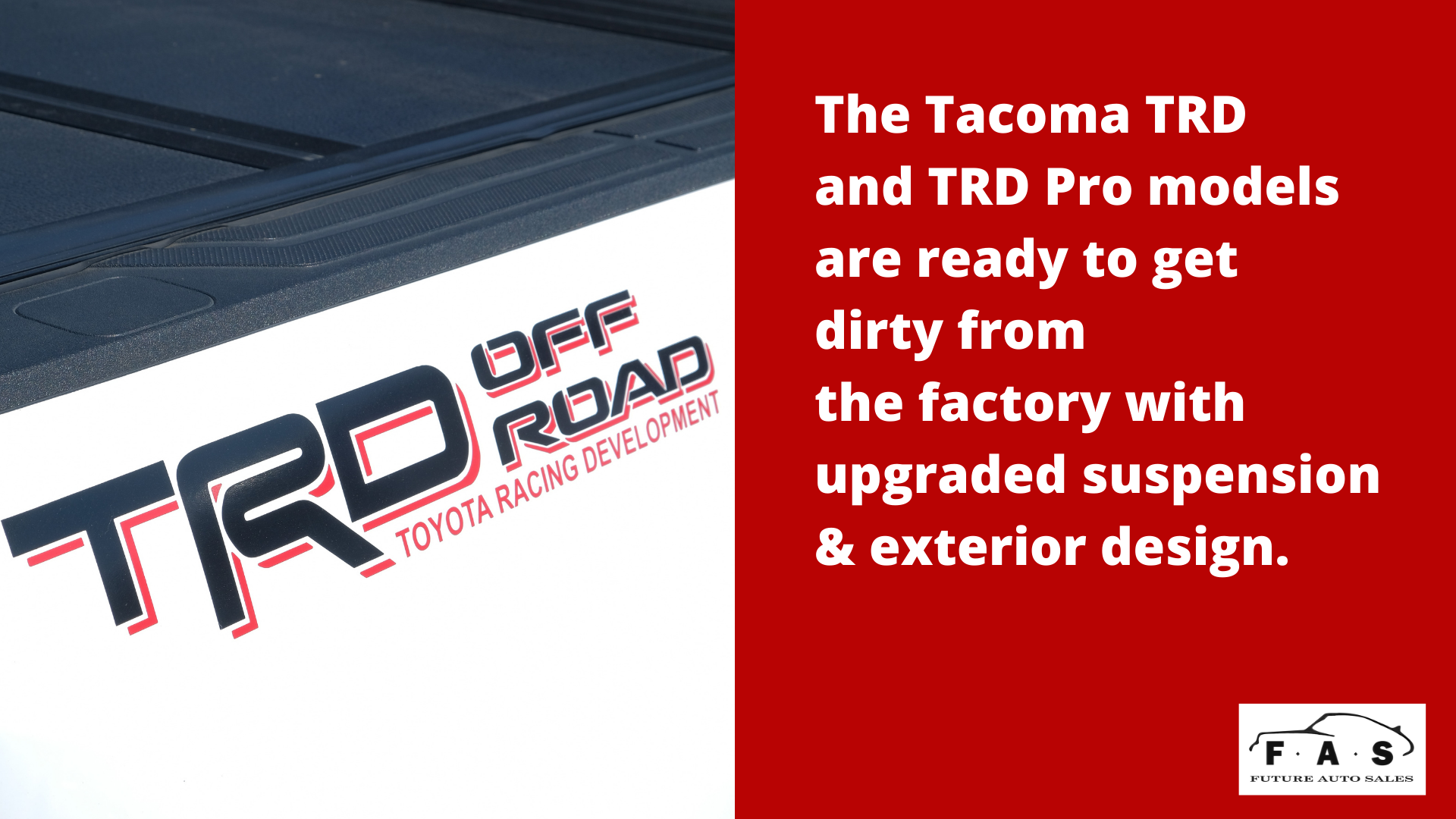 Have you ever seen a Toyota driving on the street and asked yourself how in the world is it still running?

Older generations of the Toyota Truck are still fairly present on the road and while most have been through a lot, there is no denying that their engines can go well over 200 thousand miles. If you take care of your truck it will take care of you. That’s why our team at Future Auto Sales curates only top-condition Toyota Trucks!

Take a look at our variety of Toyota Tacoma for sale with Free CarFax & window sticker to every vehicle! Click here to learn more! 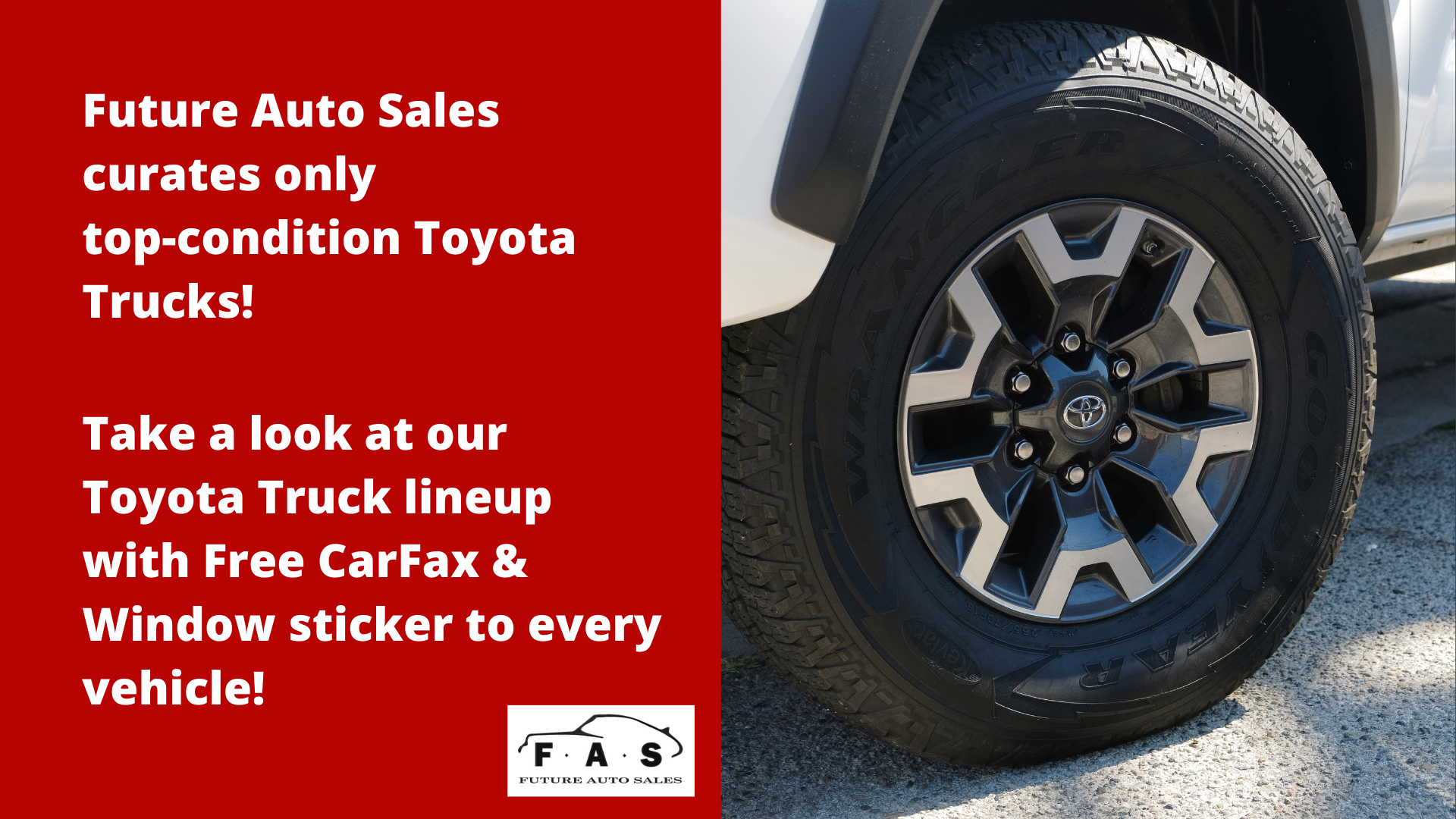 It doesn’t matter if your Toyota Tacoma has 20 or 200 thousand miles, chances are you will get paid some good money for selling it. According to CarEdge, the Tacoma only depreciates 28% after five years compared to 38% with a Ford F-150.

Practicality, reliability and good value make the Tacoma Truck unbeatable in the mid-sized truck segment. If you are looking to sell your Toyota Tacoma, Future Auto Sales will pay you the most! As an authorized Kelly Bluebook and TrueCar Buying Center, we provide our clients with fast and free appraisals while beating valid offers from other dealers.

Put the most money in your pocket now! Get started here

Who Is Future Auto Sales?

Located in Glendale California on Brand Boulevard, Future Auto Sales has been one of Los Angeles’ top-rated independent used-car dealerships. With over 20 years of experience in the Automotive industry, we help our customers with all their car needs. Whether it’s buying, selling or leasing a car, Future Auto Sales got you covered! Give us a call today, we would love to help you out!

* While every reasonable effort is made to ensure the accuracy of this information, we are not responsible for any errors or omissions contained on these pages. Please verify any information in question with Future Auto Sales.
© 2023 DealerSync. All Rights Reserved.
Powered by DealerSync